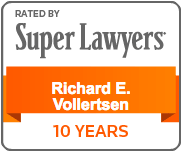 Mr. Vollertsen received his undergraduate degree from Brown University in 1975, and went on to complete his law degree at the University of San Francisco in 1981. While at the University of San Francisco Law School, he received a Moot Court Oral Advocacy Award, and was selected as Editor-in-Chief of the University of San Francisco Law Review. In addition to publication of The NEPA and Energy Legislation: The Preemption of Judicial Review, he also edited a 10-year index of the Review's past volumes. Upon graduation, he was invited to serve as law clerk for Chief Justice Edmond Burke of the Alaska Supreme Court. At the close of that clerkship, he joined the firm of Atkinson, Conway & Gagnon, Inc., in 1982 and was quickly made a partner in 1985. He currently serves as a managing partner of the firm, and has served in that capacity since 2000.

Mr. Vollertsen's representative cases include cases that have demanded extraordinary litigation efforts because of their scientific or medical complexities. As the result of his dedication and the support of the Alaska Personal Injury Group, he has obtained remarkable verdicts and settlements in such matters. He is particularly proud of overturning on appeal the law that barred parents from receiving any compensation for their emotional losses when their children were killed. Gillespie v. Beta Construction ($4 million) He also obtained the first verdict in the nation against an ephedra manufacturer, including a punitive damages award that was one of the largest in Alaska's history. That verdict also led to the FDA's confiscation of the manufacturer's product, and contributed to the FDA's removal of that class of products from the marketplace. Talbot v. E'ola Products, Inc. ($13 million) He has been honored to represent many clients who have suffered the devastating consequences of traumatic brain and spinal cord injuries. He has consequently developed an expertise in handling such medically complex claims and routinely works with nationally-recognized physicians as experts in claims brought on behalf of his clients.

Mr. Vollertsen has received the highest possible rankings for legal ability ("A" for high to preeminent) and ethical standards ("V" for very high) from Martindale-Hubbell, a national peer-review organization. Martindale-Hubbell Law Directory. Mr. Vollertsen has been listed for many years in Best Lawyers in America. In 2009, Best Lawyers in America selected him as Alaska's "Personal Injury Litigator of the Year". In both 2007 and 2009, Mr. Vollertsen was selected as one of Alaska's Super Lawyers in the specialty practice of personal injury.

Mr. Vollertsen has been an invited presenter and panelist at many Continuing Legal Education seminars and Alaska Bar Association presentations concerning various trial practice subjects. He has served as the Vice-President and a Board member for the Alaska Chapter of the American Association for Justice. He also served as a Contributing Editor of the Alaska Court Review summarizing the opinions of the Alaska Supreme Court for practicing lawyers.

A life-long Alaskan, Mr. Vollertsen arrived in Alaska in 1957, living in Bush Alaska initially in Bethel and then a homestead in Stoney River before moving to Anchorage. He graduated from West Anchorage High School in 1971. He was able to pay for his education while working as a construction laborer through the Laborer's Local 341, and worked in many parts of Alaska—Glennallen, Valdez, Palmer, Moose Point and Anchorage. His wife Linda's Alaskan roots run even deeper. Her grandfather operated the first air taxi service in Nome, Mirow Air Service, which ultimately became part of Alaska Airlines. Her great grandfather, Charles Calkins, arrived in Nome for the Gold Rush in 1898, mining out of the Daisy Mine on White Mountain. Mr. Vollertsen is also a commercial fisherman, operating a set net site in Cook Inlet, and is an accomplished amateur photographer.